Want to laugh out-loud and lip-sync non-stop for a couple hours?  Then you have to find where and go see the UK ensemble’s performance of the feel-good international hit sensation, Priscilla, Queen of the Desert: The Musical, direct from the West End.  This musical representation of the infamous Aussie film comes to the UK in full stride.

For those of you not familiar with the origins of this musical, it all started in Australia with a little indie film, written by filmmaker Stephan Elliott, that came out in 1994: The Adventures of Priscilla, Queen of the Desert.  The film and musical explore the struggles homosexual persons went through at the time in Australia, helped open the general populous’ eyes to this [at the time] fairly hidden world, and became an instant cult classic.  It definitely made it’s mark on the world and still is.  I can’t tell you how many times I have seen this film.  Love it.  Truly touching and fun. [And, by the way, Priscilla is the name of the bus the three main actors rented in the film.] 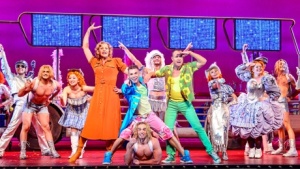 The spectacular leads selected for this film were Terrence Stamp (Bernadette – Wanted, Adjustment Bureau, Wall Street, etc.), who was the only non-Australian actor and also stated to have stepped well outside his normal, previous acting roles, Guy Pearce (Adam/Felicia Jollygoodfella – Memento, L.A. Confidential, The Hurt Locker, etc.), and Hugo Weaving (Tick/Mitzi – The Matrix Trilogy, V for Vendetta, Cloud Atlas, etc.).  The lead actors selected would probably not have been the first you would think chosen for a quirky film such as this, but they managed to bring the lives of Mitzi, Felicia, and Bernadette out beautifully.  Telling a truly touching story of Tick, who is a drag-Queen (Mitzi) in the capital city of Sydney and convinces two other drag-Queens to leave for a paid gig out in Alice Springs (the two initially unknowing of the real purpose being for Tick to meet his son for the first time).  Keep in mind, Alice Springs is in the middle of the desert and is home to once called, Ayers Rock (now reverted back to its aboriginal name, Uluṟu), so these “gals” had quite the trek to get there from Sydney.  And all sorts of adventures and tragedies occur on the way.

I will never forget the opera scene, where Felicia lip-syncs Sempra libera, from the opera La Traviata, on top of Priscilla while they were driving, with a very elaborate train of material flowing in the wind behind her/him.  Makes me smile every time.  And the musical made me smile again.

Eleven years after the release of this film, London-based producers, Liz Koops and Garry McQuinn, created a stage version, co-written by Stephan Elliott and Allan Scott, and debuted the musical in Sydney on 7 October, 2006.

When the show debuted in London, Simon Phillips noted:

The world of drag and everything that it does has at its very heart the appropriation of great songs…and the reinvention of them in the most fantastic costumes you can imagine.

When interviewed for this show, Jason Donovan (Tick/Mitzi) stresses that unleashing your inner woman is no walk in the park:

It stretches me alright.  There is a subtlety between being flamboyant and camp and playing the reality of frazzled Mitzi’s alter ego, Tick, who yearns to see his child.  Each day I walk to the theatre going through the complexities of it in my mind.

I absolutely loved this musical from start to end.  Now, don’t get me wrong, I really enjoyed Donovan’s, Richard Grieve’s (Bernadette), and Graham Weaver’s (Adam/Felicia) performances, but I have to pay particular note to  the performance of one actor: Alan Hunter, who played drag-Queen Miss Understanding.  This Essex-trained actor really made a stand out of the entire ensemble, even though he did not have a lot of parts.  Lip-syncing What’s Love Got To Do With It (Tina Turner) with a crazy pink wig (see image below), really gave the musical the kick start it needed.

As I was with a friend who had never seen the film, I was happily surprised to see them perform the positives and bring out humour from the sad scenes.  The scenes that made me cry and tense in the film were transformed into something happy and fun in the best way.  Kudos.

With floating, background Divas (Emma Kingston, Ellie Leah, and Laura Mansell) singing above in mermaid-like costumes and high, red wigs, this delightful musical features songs anyone not living under a rock would most likely know and sing along to.  From top-chart songs such as I Will Survive, Hot Stuff, and It’s Raining Men to fun, random songs such as Thank God I’m A Country Boy, the ride is well worth it.  Even the crowd got into it during the performance.  Quite a fun experience.

As for the venue, Ambassador Theatre Group’s The Palace Theatre on Oxford Road in Manchester, it was absolutely lovely, but there were some faults.  Originally known as The Grand Old Lady of Oxford Street, The Palace opened on 18 May, 1891.  I even found out that in September 1940 the theatre took a direct hit from a German bomb during the Manchester Blitz.  Now, hit Broadway and West End musical tours are opening in this Manchester theatre.  It has a beautiful interior and the statues, paintings, and Victorian styles could make one smile and feel transported back to the late 19th Century.  Even the bar located on the second floor, near the center of the Circle area, made me feel this way.

As for space – Watch out before you purchase tickets for this venue.  Circle area has leg room, the Grand Tier does not.  Unfortunately, we were sitting in the second row of the Grand Tier, which we originally thought would be excellent seats, and found to suffer vertigo going down the stairs to our seats, as they were extremely steep, slanted, and short.  We even had to slowly pass a middle-aged woman being assisted by her friend and the handle-bar alongside to get to her row (even I had my moments during Intermission).  When we managed to get to our seats, we had absolutely zero leg room and already felt like we would’ve fallen forward, but had to take baby-steps to get to our seats, for fear of falling.  My friend even managed to spill his red wine on the man in front of him.  Wasn’t his fault, as he lost his balance in the tiny space available for his feet. It happens.  I kept telling myself: It’s an old building, deal with it.  Then I think: Why did I wear heels??  If you are going to sit in the Grand Tier, I suggest sitting in the middle section, as the upper section is too far away and the middle section has much easier access and direct access to the bars.

Regardless, I would highly suggest finding the next showing’s location.  A must see.