As of September 2013, a hybrid species of tomato and potato plants was announced and introduced in the UK (TomTato) and New Zealand (Potato Tom). “Veg plot in a pot.”

This is fascinating, as the potato and tomato are two staples of most of our meals and to have them in one plant could mean double the product, less cost, and less plot space to cover for the farmer. Leaving the farmer able to focus the extra funds and space available elsewhere. 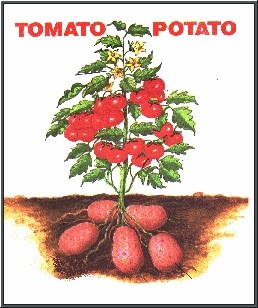 But should we be messing with nature? Playing a bit of God again are we? Haven’t we learned yet not to tamper with what nature has given us? What ever happened to don’t mess with a good thing?

As with other experiments, this one too could go wrong. However, this little plant gives me a bit more hope, as, per Ipswich-based horticultural firm Thompson and Morgan in the UK, it was not genetically modified, like so many others, and apparently the results produced have more flavour and smell than ones you currently buy from your local grocer – from which over a decade of researching was able to produce. And I absolutely adore the smell of a tomato plant.

Per Guy Barter, who is a contributor to BBC Gardener’s World and part of the Royal Horticultural Society (RHS):

In the past we’ve never had any faith in the plants – they’ve not been very good – but grafting has come on leaps and bounds in recent years.

Many people don’t have that much space in their gardens and I imagine this sort of product would appeal to them. 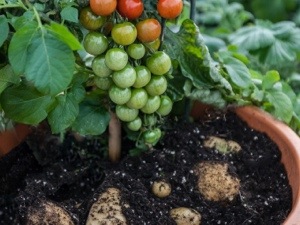 It has been very difficult to achieve because the tomato stem and the potato stem have to be the same thickness for the graft to work.

It is a very highly skilled operation. We have seen similar products. However, on closer inspection the potato is planted in a pot with a tomato planted in the same pot – our plant is one plant and produces no potato foliage.

As one who lives in a flat with a deck, this plant is perfect for my city-produce needs.

Although, Should we tamper or alter what Mother Nature, an essence and being much larger than ourselves, has already offered us for our continual existence? I know that this question is much larger than the TomTato itself, but one has to think of the bigger picture sometimes, as a bunch of small actions may lead to a great disaster. (As seen in human history.)

Still curious to try what grows from this place… I am planning on getting some seeds for my garden and I will hope for the best!

What do you think of the TomTato?
Yay or nay?

Follow Life's Many Experiences on WordPress.com
Join 30 other followers